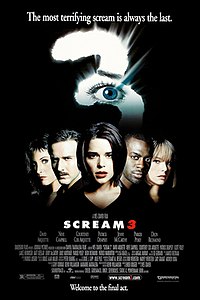 Scream 3 is a 2000 American slasher film directed by Wes Craven and written by Ehren Kruger. It stars Neve Campbell, David Arquette, Courteney Cox, Parker Posey, Patrick Dempsey, Scott Foley, Lance Henriksen, Matt Keeslar, Jenny McCarthy, Emily Mortimer, Deon Richmond, and Patrick Warburton. Released as the third installment in the Scream franchise, it was originally the concluding chapter of the series until the franchise was revived in 2011 with a sequel, Scream 4.

Cotton Weary, now the host of a successful talk show, is contacted by Ghostface on his car phone. The voice demands to know the whereabouts of Sidney Prescott. When Cotton refuses to cooperate, Ghostface breaks into his home and attacks his girlfriend Christine. Cotton rushes home only for Christine to think he was behind the attack. As he tries to reason with her, Ghostface kills Christine, then Cotton, telling him he should have revealed Sidney's location.