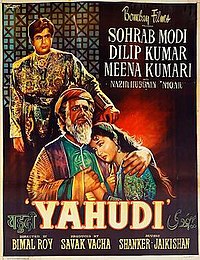 Yahudi (, Jew), is a 1958 Bollywood film directed by Bimal Roy. It starred Dilip Kumar, Meena Kumari, Sohrab Modi, Nazir Hussain, Nigar Sultana and others. It was based on the play Yahudi Ki Ladki by Agha Hashar Kashmiri, a classic in Parsi-Urdu theatre, about persecution of Jews in the Roman Empire.

Ezra (Sohrab Modi) is a jeweller who has a son called Elijah. He also has a friendly butler/childminder called Emmanuel. In the beginning, Ezra is due to leave. As he does, Elijah becomes upset and stands at the balcony. In the roads of the Jewish area, Brutus (Nazir Hussain), Governor of Rome, is passing, making an announcement. Watching over the balcony is Elijah. A stone slips from his hand and hits Brutus on the head. Brutus immediately gets Elijah arrested, and as Elijah is a Jew, sentences him to death. Hearing this, Ezra rapidly returns from his trip and arrives at the doorstep of Brutus. He begs Brutus to free Elijah, but Brutus feeds Elijah to hungry lions. Ezra sadly returns to his house. In revenge, Emmanuel kidnaps Lydia, motherless daughter of Brutus, and takes her to Ezra. Ezra declines to kill Lydia and adopts the child.