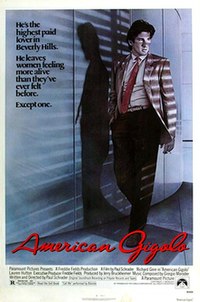 American Gigolo is a 1980 American neo-noir crime drama film written and directed by Paul Schrader and starring Richard Gere and Lauren Hutton. It tells the story about a high-priced male escort in Los Angeles who becomes romantically involved with a prominent politician's wife while simultaneously becoming the prime suspect in a murder case.

Julian Kaye (Richard Gere) is a male escort in Los Angeles, whose job is to sell his body to upper-class women. His job supports and requires an expensive taste in cars and clothes and affords him a luxury Westwood apartment. He is blatantly materialistic, narcissistic and superficial. He takes pleasure in his work from being able to sexually satisfy women, offering and selling his body to women.