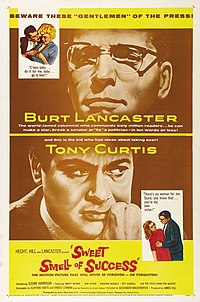 Morally bankrupt Manhattan press agent Sidney Falco is a frustrated minor player who, of late, has been unable to gain mentions for his clients in J.J. Hunsecker's influential, nationally syndicated newspaper column because of his failure to make good on a promise. Hunsecker is somewhat too fond and protective of his younger sister Susan, and has demanded that Falco break up the romance between Susan and musician Steve Dallas, an up-and-coming jazz guitarist.