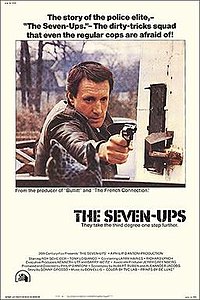 The Seven-Ups is a 1973 American mystery action film produced and directed by Philip D'Antoni. It stars Roy Scheider as a crusading policeman who is the leader of The Seven-Ups, a squad of plainclothes officers who use dirty, unorthodox tactics to snare their quarry on charges leading to prison sentences of seven years or more upon prosecution, hence the name of the team.

NYPD detective Buddy Manucci has been getting flak from the higher-ups in the New York City police force because his team of renegade policemen, known as the "seven-ups" (so called because most criminals they arrest receive sentences from seven years and up) has been using unorthodox methods to capture criminals; this is illustrated as the team ransacks an antiques store that is a front for the running of counterfeit money.