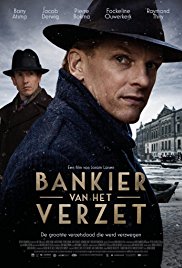 The Resistance Banker is a 2018 Dutch World War II period drama film directed by Joram Lürsen. It is based on the life of banker Walraven van Hall who financed the Dutch resistance during the war. It became the most-watched Dutch film of 2018 and was nominated for eleven Golden Calves, the first time that a film received so many nominations for the award. It won four Golden Calves, among them the prizes for Best Film and Best Actor. It was also selected as the Dutch entry for the Best Foreign Language Film category at the 91st Academy Awards, but it was not nominated.

Shortly after the German occupation of the Netherlands, Nazi collaborator Rost von Tonningen is installed as head of the Dutch State Bank. Walraven "Wally" van Hall, an Amsterdam financier, discovers that a Jewish colleague and his family have committed suicide after being ordered to surrender their home to the Germans. As Wally departs their house, a man approaches him and asks whether Wally thinks it's time to "fight back". The man is a member of the resistance, going by the alias 'van den Berg', who runs an illegal fund that pays escaped sailors to work for the Dutch government-in-exile. Van den Berg convinces Wally to organize a similar fund to compensate members of the resistance in Amsterdam.