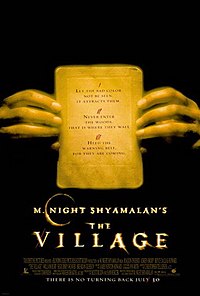 The Village is a 2004 American period thriller film written, produced, and directed by M. Night Shyamalan. It stars Bryce Dallas Howard, Joaquin Phoenix, Adrien Brody, William Hurt, Sigourney Weaver, and Brendan Gleeson. The film is about a village whose population lives in fear of creatures inhabiting the woods beyond it, referred to as "Those We Don't Speak Of".

Residents of the small, isolated, 19th-century Pennsylvania village of Covington live in fear of "Those We Don't Speak Of," nameless humanoid creatures living within the surrounding woods. The villagers have constructed a large barrier of oil lanterns and watchtowers that are constantly staffed. After the funeral of a child, the village Elders deny Lucius Hunt's request for permission to pass through the woods to get medical supplies from the city. Later, his mother Alice scolds him for wanting to visit the city, which the villagers describe as wicked. The Elders also appear to have secrets, keeping physical mementos hidden in black boxes, supposedly reminders of the evil and tragedy in the towns they left behind.