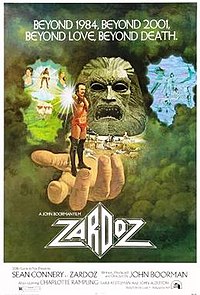 Zardoz is a 1974 Irish-American science fantasy film, and later a book, written, produced, and directed by John Boorman and starring Sean Connery and Charlotte Rampling, and featuring Sara Kestelman. The film was shot by cinematographer Geoffrey Unsworth on a budget of US$1.57 million. It depicts a post apocalyptic world (which Boorman says, in the audio commentary, is matriarchal) where barbarians (the "Brutals") worship a stone god called "Zardoz", who has the power to grant either death or eternal life, and who - in the opening scene - declares: "The gun is good! The penis is evil!". In this future dystopia, while the Brutals live in a wasteland, their overlords (the "Eternals") luxuriate in the Vortex, apparently as self-satisfied as landed gentry. The Eternals created Zardoz to control the Brutals, inciting them to mass murder. However, Zed (Sean Connery) refuses to accept the status quo and his place among the oppressed, embarking on a journey that explores the theme of genetic engineering and exposes the devastating truth about the corrupt society he lives in.

In a future post-apocalyptic Earth in the year 2293, the human population is divided into the immortal "Eternals" and mortal "Brutals." The Brutals live in a wasteland, growing food for the Eternals, who live apart in "the Vortex," leading a luxurious but aimless existence on the grounds of a country estate. The connection between the two groups is through Brutal Exterminators, who kill and terrorize other "Brutals" at the orders of a huge flying stone head called Zardoz, which supplies them with weapons in exchange for the food they collect. Zed (Sean Connery), a Brutal Exterminator, hides aboard Zardoz during one trip, temporarily "killing" its Eternal operator-creator Arthur Frayn (Niall Buggy).