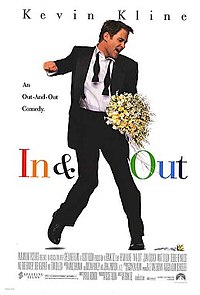 In & Out is a 1997 American comedy film directed by Frank Oz and starring Kevin Kline, Tom Selleck, Joan Cusack, Matt Dillon, Debbie Reynolds, Bob Newhart, Shalom Harlow, and Wilford Brimley. It is an original story by screenwriter Paul Rudnick. Joan Cusack was nominated for an Academy Award for Best Supporting Actress for her performance.

Howard Brackett is a well-liked English literature teacher, living a quiet life in the fictional town of Greenleaf, Indiana, with his fiancée and fellow teacher Emily Montgomery, who recently lost 75 pounds. The town is filled with anticipation over the nomination of Howard's former student Cameron Drake in the Best Actor category at the Academy Awards for his portrayal of a gay soldier in To Serve and Protect. Cameron does indeed win the award and, in his acceptance speech, thanks Howard, adding, ". . . and he's gay."