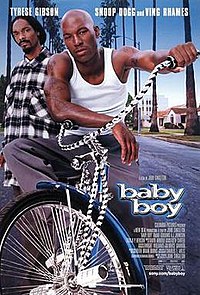 Baby Boy is a 2001 American coming-of-age hood comedy-drama film directed, written, and produced by John Singleton and starring Tyrese Gibson, Snoop Dogg, Ving Rhames, Omar Gooding, A.J. Johnson and Taraji P. Henson. The film follows Joseph "Jody" Summers (Gibson), a 20-year-old bike mechanic who still lives with his own mother (Johnson), as he lives and learns in his everyday life in the hood of Los Angeles.

Joseph "Jody" Summers waits for his girlfriend Yvette at an abortion clinic after compelling her to go. They then have a heated argument about his lack of commitment and selfishness; she asks him if he will ever come live with her and their son JoJo, but he deliberately avoids the subject and comes and goes as he pleases.