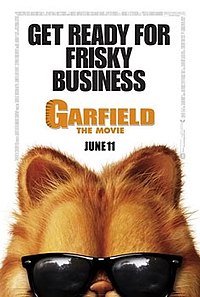 Garfield: The Movie (titled simply Garfield onscreen) is a 2004 American live action/computer-animated comedy film directed by Peter Hewitt inspired by Jim Davis' comic strip of the same name. It stars Breckin Meyer as Jon Arbuckle, Jennifer Love Hewitt as Dr. Liz Wilson and features Bill Murray as the voice of Garfield, who was created with computer animation, though all other animals were real. The film was produced by Davis Entertainment Company and distributed by 20th Century Fox. It was released in the United States on June 11, 2004. While the film received negative reviews from critics, it was a box office success, grossing over $200 million on a $50 million budget. A sequel, Garfield: A Tail of Two Kitties, was released on June 16, 2006.

Garfield is an overweight, lazy and free-spirited orange cat who lives with his owner Jon Arbuckle in a cul-de-sac in Ferndale, a suburb of Detroit, Michigan. Garfield passes his time by antagonizing Jon and teasing his aggressive neighbor, Luca the Doberman. Aside from Jon, Garfield maintains an unlikely friendship with a helpful mouse, Louis. Garfield also socializes with his fellow neighborhood cats, Nermal and Arlene.