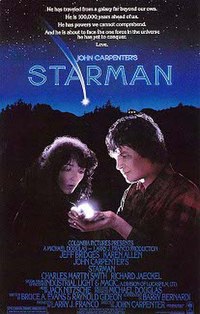 Starman is a 1984 American romance science fiction film directed by John Carpenter that tells the story of an alien who has come to Earth and cloned a humanoid body (portrayed by Jeff Bridges) in response to the invitation found on the gold phonograph record installed on the Voyager 2 space probe. The original screenplay was written by Bruce A. Evans and Raynold Gideon, with Dean Riesner making uncredited re-writes. Bridges was nominated for the Academy Award for Best Actor for his role. The film inspired a short-lived television series of the same name in 1986.

Launched in 1977, the Voyager 2 space probe carried a gold phonographic disk with a message of peace, inviting alien civilizations to visit Earth. The probe is intercepted by an alien ship which then sends a small scout vessel to establish first contact with Earth. Instead of greeting the alien craft, the U.S. government shoots it down. Crashing in Chequamegon Bay, Wisconsin, the lone alien occupant, looking like a floating ball of glowing energy, finds the home of recently widowed Jenny Hayden. While there, the alien uses a lock of hair from her deceased husband, Scott, to clone a new body for himself as a terrified Jenny watches. The alien "Starman" has seven small silver spheres with him which provide energy to perform miraculous feats. He uses the first to send a message to his people stating that Earth is hostile and his spacecraft has been destroyed. He arranges to rendezvous with them in three days' time. He then uses the second sphere to create a holographic map of the United States, coercing Jenny into taking him to the rendezvous point in Arizona.