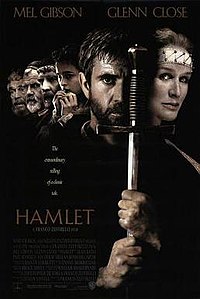 Hamlet is a 1990 drama film based on the Shakespearean tragedy of the same name, directed by Franco Zeffirelli and starring Mel Gibson as the eponymous character. The film also features Glenn Close, Alan Bates, Paul Scofield, Ian Holm, Helena Bonham Carter, Stephen Dillane, and Nathaniel Parker. An international co-production between the United States, the United Kingdom, and Italy, the film was the first produced by Icon Productions, a company co-founded by Gibson.

In Denmark, Prince Hamlet finds himself involved in a conspiracy of powerful interests within the royal palace. Cruel uncle Claudius kills his brother and takes the power of the kingdom. After an encounter with the restless ghost of his murdered father, Hamlet feigns madness and plots to take vengeance.