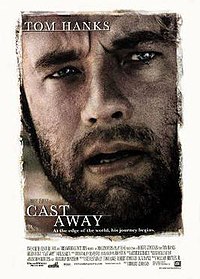 Cast Away is a 2000 American survival drama film directed and produced by Robert Zemeckis and starring Tom Hanks, Helen Hunt, and Nick Searcy. Hanks plays a FedEx troubleshooter stranded on an uninhabited island after his plane crashes in the South Pacific, and the plot focuses on his desperate attempts to survive and return home. Initial filming took place from January to March 1999 before resuming in April 2000 and concluding that May.

In 1995, Chuck Noland, a systems analyst executive, travels the world resolving productivity problems at Federal Express depots. He lives with his girlfriend, Kelly Frears, in Memphis, Tennessee. The couple wants to get married, but Chuck's busy schedule prevents it.