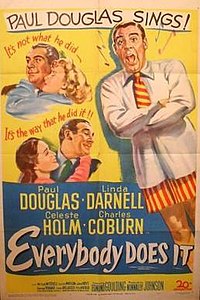 Everybody Does It is a 1949 comedy film starring Paul Douglas, Linda Darnell and Celeste Holm.

Leonard Borland (Paul Douglas) lives and works in New York City as a wrecking contractor, married to socialite Doris (Celeste Holm). Even though– according to her husband– she has no singing talent, Doris considers herself an aspiring opera singer and regularly pressures Leonard to accompany her to operas. Already dismayed by his father-in-law Major Blair's (Charles Coburn) insistence that Doris take some singing lessons, Leonard becomes further estranged from Doris when her career takes off. Despite financing her recital and arranging an important critic to watch her performance, Doris shows no gratitude.