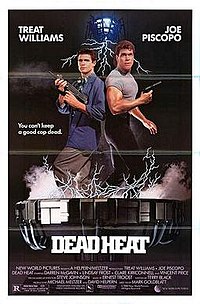 Dead Heat (released in the Philippines as Iron Cops) is a 1988 American buddy cop action zombie comedy film directed by Mark Goldblatt and starring Treat Williams and Joe Piscopo. The film is about an LAPD police officer who is murdered while attempting to arrest zombies who have been reanimated by the head of Dante Laboratories in order to carry out violent armed robberies, and decides to get revenge with the help of his former partner.

Detectives Roger Mortis and Doug Bigelow are called to the scene of a rather violent jewelry store robbery. The robbers take on a squadron of police in a messy shootout, but neither seem affected when they are riddled with bullets. Thanks to the combined, albeit extreme measures of Mortis and Bigelow, they are able to take out the criminals, their acts narrowly avoiding termination. Meanwhile, a coroner friend of Roger's, Rebecca informs the detectives that the two bodies they had brought in had previously been to the morgue: not only do they have autopsy scars, but she herself clearly remembers performing the autopsy and has pictures to prove it, suggesting they simply got up and left the morgue at their own volition.