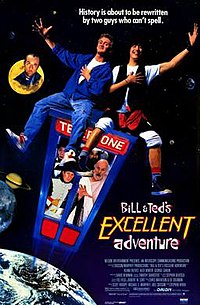 In 2688, humanity exists as a utopian society due to the inspiration of the music and philosophy of the Two Great Ones, Bill S. Preston, Esq., and Ted "Theodore" Logan. One of the citizens, Rufus, is tasked by the leaders to travel back to San Dimas, California, in 1988 using a time machine shaped like a phone booth to ensure that the young Bill and Ted, then dim-witted high school students, successfully pass a history class. Should they fail, Ted's father, police captain Logan, plans to ship Ted to a military academy in Alaska, ending Bill & Ted's fledgling band, the "Wyld Stallyns", and altering history.