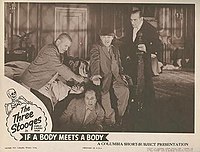 If a Body Meets a Body is a 1945 short subject directed by Jules White starring American slapstick comedy team The Three Stooges (Moe Howard, Larry Fine and Curly Howard). It is the 86th entry in the series released by Columbia Pictures starring the comedians, who released 190 shorts for the studio between 1934 and 1959.

The Stooges are unemployed, and looking through the want-ads for work. As the trio sets the table, Curly brings a pail of soup from a meat bone; Larry remarks that Curly's soup smells like a dead horse, and Moe finds a large horseshoe in the pail. The duo becomes angry with Curly about the fact that they "sent him to the butcher shop for meat, not to the glue factory", so they kick him out. As Curly was about to leave, Moe stumbles upon a newspaper article stating that Curly's uncle, Bob O. Link (Al Thompson), has died and left his nephew, Curly Q. Link, a large inheritance. Upon arriving at the uncle's mansion for the reading of the will, the lawyer in charge of the will disappears, along with the will itself; he is later found murdered. All potential heirs, including the Stooges, are held as suspects and forced to spend the night.