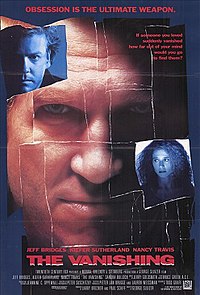 The Vanishing is a 1993 American psychological thriller film directed by George Sluizer and starring Jeff Bridges, Kiefer Sutherland, Nancy Travis, and Sandra Bullock. It is a remake of Sluizer's 1988 French-Dutch film of the same name.

The film begins with chemistry professor Barney Cousins (Jeff Bridges) at his cabin, seemingly perfecting methods in which to conduct a successful kidnapping. He is so dedicated to his craft that his wife Helene (Lisa Eichhorn) and his daughter Denise (Maggie Linderman) suspect he is having an affair. Jeff Harriman (Kiefer Sutherland) goes on vacation with his girlfriend Diane Shaver (Sandra Bullock), who vanishes without a trace at a gas station. Three years later, Jeff has become obsessed with finding out what happened, posting fliers and following leads relentlessly. Exhausted, he stops at a diner and meets a waitress named Rita (Nancy Travis) who sympathizes with his plight and looks after him. A year later, the two are a couple and have settled in an apartment in Seattle. Jeff, who is attempting to write a novel, meets with a publisher who suggest that he write a book about the disappearance. Knowing this will upset Rita, he hides his project, buys a used military uniform at a surplus store and uses army reserve drills as a cover to continue his search. One weekend, Rita is at home and curious about his project. She goes to the computer and cracks a code using several letters of Diane's name, accessing Jeff's rough draft of a children's book. After reading it, she discovers it's actually about Diane's disappearance. Rita tracks Jeff to his motel room and angrily confronts him. Jeff finally tells the truth about how Diane disappeared and commits to only Rita. Following her ultimatum, Jeff abandons the search and burns the missing posters of Diane.