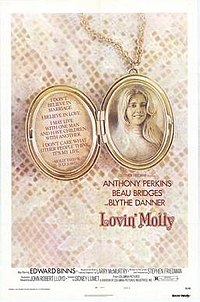 Lovin' Molly is a 1974 American drama film directed by Sidney Lumet and starring Anthony Perkins, Beau Bridges, Blythe Danner in the title role, Ed Binns, and Susan Sarandon. The film is based on one of Larry McMurtry's first novels, Leaving Cheyenne. Prior to release, the film was also known as Molly, Gid, and Johnny and The Wild and The Sweet.

Over a span of nearly 40 years, Gid and Johnny, a pair of Texas farm boys, compete for the affections of Molly Taylor, a free spirit who cares for both of them. The story is told in three consecutive segments, each narrated by one of the three lead roles.