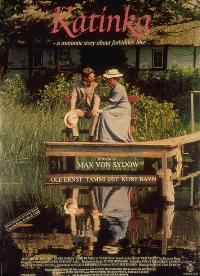 Katinka (, ) is a 1988 Danish-Swedish drama film directed by Max von Sydow and starring Tammi Øst. Based on Herman Bang's novel Ved Vejen (1886) which is included in the Danish Culture Canon, it was screened in the Un Certain Regard section at the 1988 Cannes Film Festival. At the 24th Guldbagge Awards it won the award for Best Film and Von Sydow won the award for Best Director.