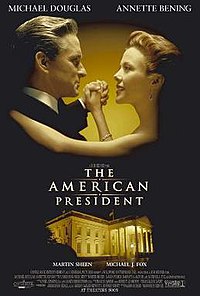 The American President is a 1995 American romantic comedy-drama film directed & produced by Rob Reiner and written by Aaron Sorkin. The film stars Michael Douglas, Annette Bening, Martin Sheen, Michael J. Fox, and Richard Dreyfuss. In the film, President Andrew Shepherd (Douglas) is a widower who pursues a relationship with environmental lobbyist Sydney Ellen Wade (Bening) – who has just moved to Washington, D.C. – while at the same time attempting to win the passage of a crime control bill during a re-election year.

Popular Democratic President Andrew Shepherd is preparing to run for re-election. The President and his staff, led by Chief of Staff and best friend A.J. MacInerney, attempt to consolidate the administration's 63% approval rating by passing a moderate crime control bill. However, support for the bill in both parties is tepid: conservatives do not want it, and liberals think it is too weak. If it passes, however, Shepherd's re-election is presumed by his staff to be a shoo-in, and Shepherd resolves to announce the bill, and the Congressional support to pass it, by his State of the Union Address.