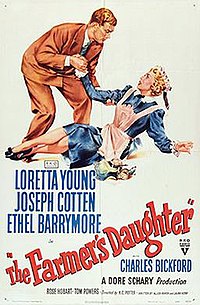 The Farmer's Daughter is a 1947 American comedy film that tells the story of a farmgirl who ends up working as a maid for a Congressman and his politically powerful mother. It stars Loretta Young, Joseph Cotten, Ethel Barrymore, and Charles Bickford, and was adapted by Allen Rivkin and Laura Kerr from the 1937 Finnish play Juurakon Hulda by Hella Wuolijoki, using the pen name Juhani Tervapää (misspelled in the film's credits as Juhni Tervataa). It was directed by H.C. Potter.

Katie Holstrom (Loretta Young), a Swedish-American, leaves the family farm to attend nursing school in Capitol City. Barn painter Adolph Petree (Rhys Williams), who completed a job for Katie's father, offers her a ride, then steals her money along the way. Katie, refusing to ask her family for help, goes to work as a maid for political power broker Agatha Morley (Ethel Barrymore) and her son, U.S. Representative Glenn Morley (Joseph Cotten). She impresses Agatha and her loyal butler Joseph Clancey (Charles Bickford) with her refreshing, down-to-earth common sense. Glenn is impressed with her other charms.