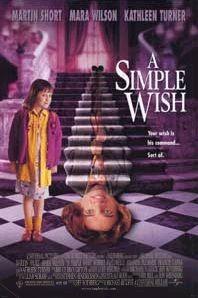 A Simple Wish is a 1997 American children's-fantasy-comedy film directed by Michael Ritchie, and starring Martin Short, Mara Wilson, and Kathleen Turner. The film is about a bumbling male fairy godmother named Murray (Short), who tries to help Annabel (Wilson) fulfill her wish that her father, a carriage driver, wins the leading role in a Broadway musical.

NYC horse carriage driver Oliver Greening (Robert Pastorelli) aspires to perform on Broadway and, despite an outstanding audition for A Tale of Two Cities musical, he loses out to seasoned Tony Sable (Alan Campbell), as he is considered more bankable, as Oliver's reputation as an actor is non-existent.