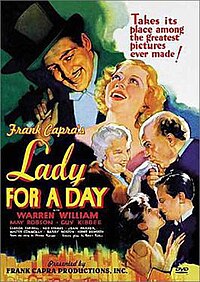 Lady for a Day is a 1933 American pre-Code comedy-drama film directed by Frank Capra. The screenplay by Robert Riskin is based on the 1929 short story "Madame La Gimp" by Damon Runyon. It was the first film for which Capra received an Academy Award nomination for Best Director and the first Columbia Pictures release to be nominated for Best Picture. Capra also directed its 1961 remake, Pocketful of Miracles.

The story focuses on Apple Annie (May Robson), an aging and wretched fruit seller in New York City, whose daughter Louise (Jean Parker) has been raised in a Spanish convent since she was an infant. Louise has been led to believe her mother is a society matron named Mrs. E. Worthington Manville who lives at the Hotel Marberry. Annie discovers her charade is in danger of being uncovered when she learns Louise is sailing to New York with her fiancé Carlos (Barry Norton) and his father, Count Romero (Walter Connolly).