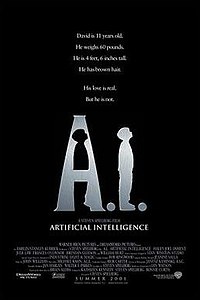 A.I. Artificial Intelligence (also known as A.I.) is a 2001 American science fiction drama film directed by Steven Spielberg. The screenplay by Spielberg and screen story by Ian Watson were loosely based on the 1969 short story "Supertoys Last All Summer Long" by Brian Aldiss. The film was produced by Kathleen Kennedy, Spielberg and Bonnie Curtis. It stars Haley Joel Osment, Jude Law, Frances O'Connor, Brendan Gleeson and William Hurt. Set in a futuristic post-climate change society, A.I. tells the story of David (Osment), a childlike android uniquely programmed with the ability to love.

In the 22nd century, rising sea levels from global warming have wiped out coastal cities, reducing the world's population. Mecha, humanoid robots seemingly capable of complex thought but lacking in emotions, have been created. In Madison, New Jersey, David, a prototype Mecha child capable of experiencing love, is given to Henry Swinton and his wife Monica, whose son Martin contracted a rare disease and has been placed in suspended animation. Monica feels uneasy with David, but eventually warms to him and activates his imprinting protocol, causing him to have an enduring childlike love for her. David seeks to have Monica express the same love towards him. David is befriended by Teddy, a robotic teddy bear which belonged to Martin. Martin is unexpectedly cured of his disease and brought home. Martin becomes jealous of David, and taunts him to perform worrisome acts, such as cutting off locks of Monica's hair while she is sleeping. At a pool party, one of Martin's friends pokes David with a knife, triggering his self-protection programming. David grabs onto Martin, and they both fall into the pool. Martin is saved before he drowns, and Henry convinces Monica to return David to his creators to be destroyed. On the way there, Monica has a change of heart and spares David from destruction by leaving him in the woods. With Teddy as his only companion, David recalls The Adventures of Pinocchio and decides to find the Blue Fairy so that she may turn him into a real boy, which he believes will win back Monica's love.