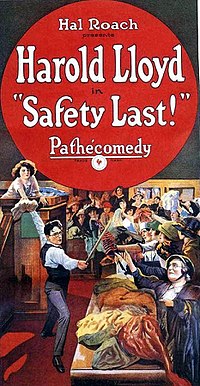 Safety Last! is a 1923 American silent romantic comedy film starring Harold Lloyd. It includes one of the most famous images from the silent film era: Lloyd clutching the hands of a large clock as he dangles from the outside of a skyscraper above moving traffic. The film was highly successful and critically hailed, and it cemented Lloyd's status as a major figure in early motion pictures. It is still popular at revivals, and it is viewed today as one of the great film comedies.

The film opens in 1922 with Harold Lloyd (the character has the same name as the actor) behind bars. His mother and his girlfriend, Mildred, are consoling him as a somber official and priest show up. The three of them walk toward what looks like a noose. It then becomes obvious they are at a train station and the "noose" is actually a trackside pickup hoop used by train crews to receive orders without stopping, and the bars are merely the ticket barrier. He promises to send for his girlfriend so they can get married once he has "made good" in the big city. Then he is off.