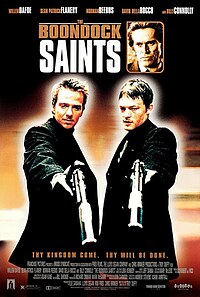 The Boondock Saints is a 1999 American vigilante action thriller film written and directed by Troy Duffy. The film stars Sean Patrick Flanery and Norman Reedus as fraternal twin brothers Connor and Murphy MacManus, who become vigilantes after killing two members of the Russian Mafia in self-defense. After both experience an epiphany, the twins, together with their friend "Funny Man" Rocco (David Della Rocco), set out to rid their home city of Boston of crime and evil, all the while being pursued by FBI special agent Paul Smecker (Willem Dafoe).

In Boston, two Irish American fraternal twin brothers, Connor and Murphy MacManus (Sean Patrick Flanery and Norman Reedus), attend Mass, where the priest mentions the fate of Kitty Genovese. Later, when Connor and Murphy are celebrating Saint Patrick's Day with friends, three Russian mobsters arrive and announce they want to close the pub and take over the land it is built on. A brawl ensues, in which the Russians are defeated and humiliated. The next morning, when two of the Russians seek revenge on Connor and Murphy, the mobsters are killed in self-defense.