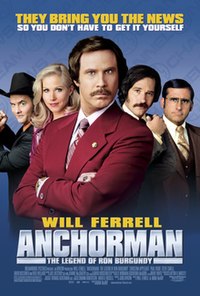 Anchorman: The Legend of Ron Burgundy 2004

Anchorman: The Legend of Ron Burgundy is a 2004 American satirical comedy film directed by Adam McKay in his directorial debut, produced by Judd Apatow, starring Will Ferrell and Christina Applegate and written by McKay and Ferrell. The first installment in the Anchorman series, the film is a tongue-in-cheek take on the culture of the 1970s, particularly the new Action News format. It portrays a San Diego television station where Ferrell's title character clashes with his new female counterpart.

In 1974, Ron Burgundy is the famous anchorman for a local San Diego television station, fictional KVWN channel 4. He works alongside his friends, whom he had known since childhood, on the news team: lead field reporter Brian Fantana, sportscaster Champ Kind, and meteorologist Brick Tamland.