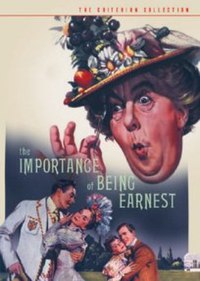 The Importance of Being Earnest 1952

The story takes place on 14 February 1895. It is about two gentlemen pretending to be people other than themselves. Interwoven in their storylines are two romance-stricken ladies, each possessing an unusual allegiance to the manliness of the name Ernest. London man-about-town Jack Worthing, who hides behind the name Ernest, is an aristocrat from the country with uncertain lineage. His friend, Algernon Moncrieff, is of moderate means and has also created an imaginary character, Bunbury. Algernon's cousin, Gwendolen Fairfax, has caught the eye of Jack. Jack's ward in the country, Cecily Cardew, has caught the eye of Algernon. Lady Bracknell rules the roost with her heavy-handed social mores.