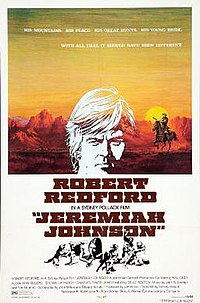 Jeremiah Johnson is a 1972 American Revisionist Western film directed by Sydney Pollack and starring Robert Redford as the title character and Will Geer as "Bear Claw" Chris Lapp. It is based partly on the life of the legendary mountain man John Jeremiah Johnson, recounted in Raymond Thorp and Robert Bunker's book Crow Killer: The Saga of Liver-Eating Johnson and Vardis Fisher's novel Mountain Man.

Mexican War veteran Jeremiah Johnson takes up the life of a mountain man, supporting himself in the Rocky Mountains as a trapper. His first winter in mountain country is difficult, and he has a run-in with Paints-His-Shirt-Red, a chief of the Crow tribe. He starts out with a .30-caliber Hawken percussion rifle, which he uses as his main rifle until he finds