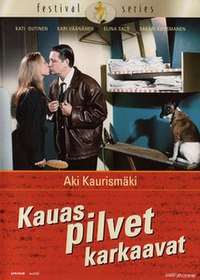 Drifting Clouds is a 1996 Finnish comedy drama film edited, written, produced, and directed by Aki Kaurismäki and starring Kati Outinen, Kari Väänänen and Markku Peltola. The film is the first in Kaurismäki's Finland trilogy, the other two films being The Man Without a Past and Lights in the Dusk. The film was selected as the Finnish entry for the Best Foreign Language Film at the 69th Academy Awards, but was not accepted as a nominee.

Ilona Koponen (Kati Outinen), a head waitress at Dubrovnik restaurant, is married to Lauri (Kari Väänänen), a tram driver. They live in a small, modestly furnished apartment in Helsinki. As they come home from work late one night, Lauri surprises Ilona with a television which he purchased on hire purchase. They talk about whether they can meet their financial obligations, but agree that the TV payments are manageable.