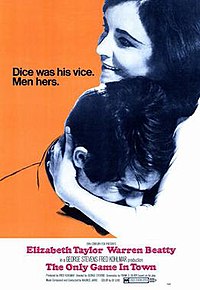 The Only Game in Town is a 1970 American romantic comedy-drama film, the last directed by George Stevens. It stars Elizabeth Taylor and Warren Beatty. The screenplay by Frank D. Gilroy is based on his play of the same name which had a brief run on Broadway in 1968.

Aging Las Vegas chorine Fran Walker drifts into an affair with lounge pianist and compulsive gambler Joe Grady while waiting for her married lover, San Francisco businessman Thomas Lockwood, to finalize the divorce he has been promising to get for the past five years.