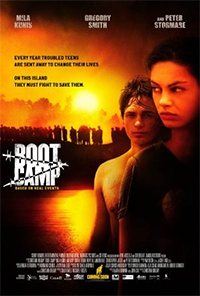 Boot Camp, also released in the UK as Punishment, is a 2008 suspense psychological thriller film written by Agatha Dominik and John Cox and directed by Christian Duguay.

This film is the story of a group of unruly teenagers whose parents send them to a rehabilitation boot camp to turn them around. The camp collects each child individually, then delivers them to the boot camp facility owned by Dr. Arthur Hail, on a remote island in Fiji. There are no walls to stop the teenagers from leaving, but escape is impractical due to the surrounding sea. On arriving at the camp, the teenagers are forced to wear cuffs with sensors around their ankles—if they attempt to escape, security will be alerted.