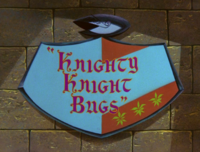 King Arthur is sitting with his Knights of the Round Table, talking about hard times that have befallen the kingdom ever since the Black Knight stole the Singing Sword. He asks his knights—among them Sir Osis of Liver and Sir Loin of Beef—for a volunteer to get the sword back. The knights complain that the Black Knight has a fire-breathing dragon guarding the sword and is invincible. King Arthur angrily demands to know if the knights are all chicken, and is dismayed when he hears clucking and sees chicken feathers flying. Bugs, dressed as a court jester, dances in and tells King Arthur that "only a fool" would be crazy enough to go after the Singing Sword. The King agrees, and tells Bugs that he has to get the singing sword, or else face being executed.