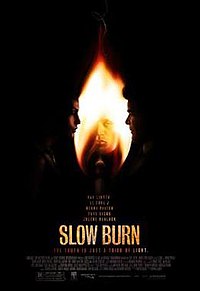 Slow Burn is a 2005 American drama thriller film directed by Wayne Beach and starring Ray Liotta, Jolene Blalock and LL Cool J. It is notable for the extended period between production and eventual release. A crime drama, the film was produced in 2003, was finally given a showing at the 2005 Toronto International Film Festival, and finally got a proper theatrical release in 2007.

Nora Timmer, a biracial (African and European descent) woman, is being questioned by Ford Cole, the District Attorney. Nora, who is the Assistant District Attorney, claims she was being raped by Isaac Duparde when she shot him in the head. Journalist Ty Trippin interviews Ford; Ford surprises Ty by anticipating his first two questions.