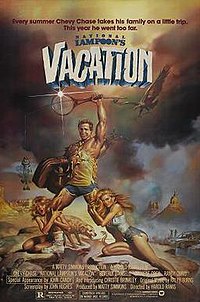 Clark Griswold, wanting to spend more time with his wife Ellen and children Rusty and Audrey, decides to lead the family on a cross-country expedition from the Chicago suburbs to the southern California amusement park Walley World, billed as "America's Favorite Family Fun Park." Ellen wants to fly, but Clark insists on driving, so he can bond with his family. He has ordered a new car in preparation for the trip, but the dealer claims that it will not be ready for six weeks.