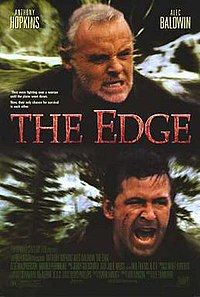 The Edge is a 1997 American survival film directed by Lee Tamahori and starring Anthony Hopkins and Alec Baldwin. A plane carrying wealthy Charles Morse (Hopkins) crashes down in the Alaskan wilderness. Together with the two other passengers, photographer Bob Green (Baldwin) and assistant Stephen (Harold Perrineau), Charles devises a plan to help them reach civilization. However, his biggest obstacle might not be the elements, or even a large Kodiak bear stalking them—it could be Bob, whom Charles has reason to believe is having an affair with his wife and would not mind seeing him dead. Bart the Bear, a trained Kodiak bear known for appearances in several Hollywood movies, also appears in the film as the vicious Kodiak; this was one of his last film roles.

Charles Morse (Anthony Hopkins), a billionaire; Robert "Bob" Green (Alec Baldwin), a photographer; and Stephen (Harold Perrineau), Bob's assistant, arrive in a remote Alaskan village with Charles' wife, Mickey (Elle Macpherson), a model. Styles (L.Q. Jones), the proprietor of the lodge, warns everyone about not leaving uncovered food that will attract bears. Charles is surprised with a birthday party where Mickey gives him an engraved pocket watch and Bob gives him a pocket knife. Another of Charles's valued possessions is a book with instruction and advice for surviving in the wild. During key moments early on, he is often shown losing the thread of conversations because he is so absorbed in his reading.