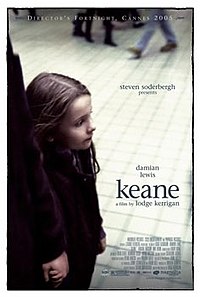 Keane is a 2004 American drama film written and directed by Lodge Kerrigan. Set in New York City, it focuses on a mentally disturbed man trying to come to terms with the abduction of his daughter several months earlier and the relationship he develops with a young girl and her mother.

Searching for his missing daughter Sophia in the Port Authority Bus Terminal, from which she was abducted several months earlier, William Keane confronts ticket agents and random passersby with a newspaper account of her disappearance, but no one recalls seeing the little girl. After spending the night wandering the streets and sleeping along the side of the highway, he returns to the cheap hotel where he is living and finds he is unable to get into his room. The desk clerk tells him his payment is in arrears, and Keane covers the cost of another week's stay with a disability check.