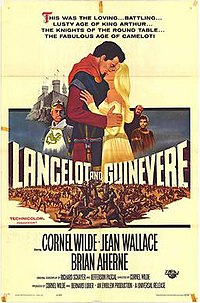 Lancelot and Guinevere (known as Sword of Lancelot in the U.S.) is a British 1963 film starring Cornel Wilde, his real-life wife at the time, Jean Wallace, and Brian Aherne. This lesser-known version of the Camelot legend is a work shaped predominantly by Cornel Wilde, who co-produced, directed, co-wrote, and played Lancelot.

Lancelot is King Arthur's most valued Knight of the Round Table and a paragon of courage and virtue. Things change, however, when he falls in love with Queen Guinevere. A sub-plot concerns Arthur's effort to forestall a challenge from a rival king, a problem that will inevitably catch Lancelot up in a personal conflict.