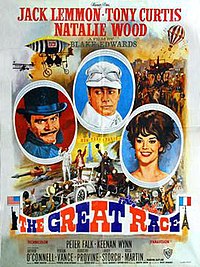 The Great Race is a 1965 American Technicolor slapstick comedy film starring Jack Lemmon, Tony Curtis, and Natalie Wood, directed by Blake Edwards, written by Arthur A. Ross (from a story by Edwards and Ross), and with music by Henry Mancini and cinematography by Russell Harlan. The supporting cast includes Peter Falk, Keenan Wynn, Arthur O'Connell and Vivian Vance. The movie cost US$12million (equivalent to $98.36 million in 2020), making it the most expensive comedy film at the time. The story was inspired by the actual 1908 New York to Paris Race.

The Great Leslie and Professor Fate are competing daredevils at the turn of the 20th century. Leslie is the classic hero archetype – always dressed in white, handsome, ever-courteous, enormously talented and successful. Leslie's nemesis, Fate, is the traditional melodramatic villain – usually dressed in black, sporting a black moustache and top hat, glowering at almost everyone, possessing a maniacal evil laugh, filled with grandiose plans to thwart the hero, and dogged by failure. Leslie proposes an automobile race from New York City to Paris and offers the Webber Motor Car Company the opportunity to build an automobile to make the journey. They design and build a new car for him, "The Leslie Special". Fate builds his own car, "The Hannibal Twin-8", complete with hidden devices of sabotage. Other car owners enter the race, including one owned by New York City's most prominent newspaper. Driving the newspaper's car is beautiful photojournalist Maggie DuBois, a vocal suffragist.