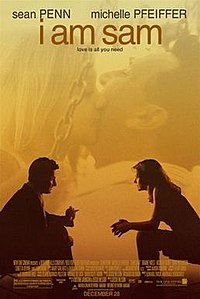 I Am Sam (stylized i am sam) is a 2001 American drama film co-written and directed by Jessie Nelson, and starring Sean Penn as a father with an intellectual disability, Dakota Fanning as his bright and inquisitive daughter, and Michelle Pfeiffer as his lawyer. Dianne Wiest, Loretta Devine, Richard Schiff, and Laura Dern appear in supporting roles.

In 1993, Samuel Dawson, a Starbucks employee with an intellectual disability, becomes the single father of Lucy Diamond Dawson, named after The Beatles song "Lucy in the Sky with Diamonds", following their abandonment by her mother, a homeless woman with whom Sam had a sexual encounter.