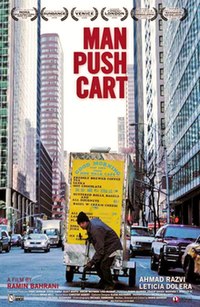 Man Push Cart is a 2005 American independent film by Ramin Bahrani that tells the story of a former Pakistani rock star who sells coffee and bagels from his pushcart on the streets of Manhattan.

Early every morning, Ahmad (Ahmad Razvi), a Pakistani immigrant, struggles to drag his heavy cart along the streets of New York to his corner in midtown Manhattan, where he sells coffee and bagels. He encounters a wealthy Pakistani businessman who offers him some work and financial assistance—promising also to introduce him to the NY music scene. He also spends time with a young Spanish woman who works in a nearby newspaper and magazine kiosk. He is haunted by the death of his wife and is unable to spend time with his son. Just as it appears that he is making some progress improving his life, an event occurs that pushes him back down again.