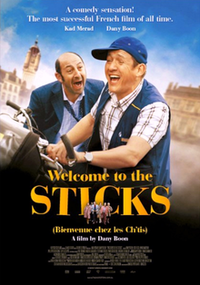 Welcome to the Sticks ( ) is a 2008 French comedy film directed and co-written by Dany Boon and starring Kad Merad and Boon himself. The film is the highest-grossing film of all time at the box office in France.

Philippe Abrams is the manager of the French post office (La Poste) branch in Salon-de-Provence, Bouches-du-Rhône, in southern France. He is married to Julie, whose negative character makes his life miserable. Philippe does everything to get a job at an office on the Mediterranean coast to make her happy. As this desirable position will only be granted to a disabled person, Abrams pretends that he is – and is found out by the management. As punishment, he is banished for two years to Bergues, a town near Dunkirk in northern France. Northern France – and the Nord-Pas-de-Calais region in particular – is considered "the sticks" – a cold and rainy place inhabited by unsophisticated ch'tis who speak a strange dialect (called "''ch'ti'' in local parlance, and "cheutimi in the South). He has to spend his first night at the home of Antoine, a member of his staff. Philippe initially dislikes Antoine for his obnoxious behaviour and because he initially thinks Antoine is gay but, later he finds out that he secretly has a crush on Annabelle, one of the workers at the post office. However, Antoine and Philippe later become best friends.