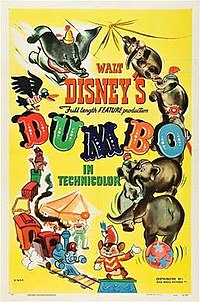 Dumbo is a 1941 American animated fantasy film produced by Walt Disney Productions and released by RKO Radio Pictures. The fourth Disney animated feature film, it is based upon the storyline written by Helen Aberson and Harold Pearl, and illustrated by Helen Durney for the prototype of a novelty toy ("Roll-a-Book"). The main character is Jumbo Jr., an elephant who is cruelly nicknamed "Dumbo", as in "dumb". He is ridiculed for his big ears, but in fact he is capable of flying by using his ears as wings. Throughout most of the film, his only true friend, aside from his mother, is the mouse, Timothy – a relationship parodying the stereotypical animosity between mice and elephants.

While a large circus spends the off-season in the "Winter Grounds" in Florida, a flock of white storks delivers babies to the animals. One elephant, Mrs. Jumbo, does not receive her baby, and keeps scanning the sky. The circus sets out on a new tour, and a belated stork catches up with the moving train and drops off the expected baby elephant, Jumbo Junior. The other elephants are initially delighted, until they see the baby has far-oversized ears, and promptly nickname him "Dumbo". However, Mrs. Jumbo shows her baby great care and love, defending him from the teasing of the other elephants.