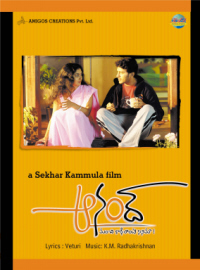 Anand (Sanskrit meaning for Happiness) is a 2004 Indian Telugu-language drama film that was directed, produced and written by Sekhar Kammula. The film has the tagline Manchi coffee lanti cinema meaning a movie that is like a cup of good coffee. The lead roles were played by Raja and Kamalinee Mukherjee. The film was well received by critics and became a Cult Classic at the box office, it was remade in Tamil as Ninaithale. The film's basic story was also chosen as the subject for Sekhar Kammula's thesis screenplay which was a requirement for his Masters in Fine Arts at Howard University. The film was screened at the International Film Festival of India in the mainstream section.

The film is a story of a modern-day girl Roopa (Kamalinee Mukherjee). She begins her day with classical music lessons for kids in her neighborhood followed by her day job in an ad-agency. She along with her close friend Anita (Satya Krishnan) work on weekends at a nursery. Roopa is shown as a woman who stands for her self-respect, determined at her decisions and yet lovable and sensitive.