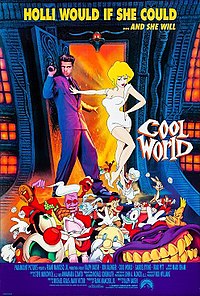 Cool World is a 1992 American live-action/animated black comedy fantasy film directed by Ralph Bakshi, and starring Kim Basinger, Gabriel Byrne and Brad Pitt. It tells the story of a cartoonist who finds himself in the animated world he thinks he created, where he is seduced by one of the characters, a comic strip vamp who wants to be real.

In 1945, in Las Vegas, World War II veteran Frank Harris returns to his mother and invites her to a ride on his motorcycle. The two are involved in a traffic collision; Frank's mother dies, while Frank is transported to an animated realm called the "Cool World". In 1992, cartoonist Jack Deebs is serving a 10-year prison sentence for the murder of a man he had found in bed with his wife. During his sentence, he has visions of the Cool World and the femme fatale Holli Would, who seems to beckon him. Jack spends his sentence creating a series of comics based on his visions. Meanwhile, Frank has become a detective in the Cool World and keeps his eye on Holli to ensure that the two worlds do not intertwine. Shortly after his release from prison, Jack is transported into the Cool World and smuggled into a local nightclub by Holli and her henchmen, the Goons.