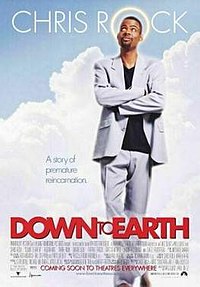 Down to Earth is a 2001 American fantasy-comedy film directed by Chris and Paul Weitz and written by Chris Rock, Lance Crouther, Ali LeRoi and Louis C.K. It is the third film based on Harry Segall's stageplay Heaven Can Wait, preceded by Here Comes Mr. Jordan (1941) and Heaven Can Wait (1978). The film stars Chris Rock as Lance Barton, a comedian who is killed before his time on Earth is through. He is given another chance to continue his life, but in the body of a rich middle-aged white man.

Lance Barton (Chris Rock) is a struggling comedian who is quite funny and confident in his personality, but is unable to bring his talent across in front of an audience. After being booed off stage one night he hears about an opportunity from his manager, Whitney Daniels (Frankie Faison), at the Apollo Theater, which is having a goodbye show due to its imminent closing. He is hoping to get a chance to prove himself in front of a real audience, when on his way home riding a bike Lance is distracted by Sontee Jenkins (Regina King). Not paying attention, he is hit by a semi truck and is instantly killed. Because of this, Lance is brought up to Heaven where he meets the angels, King (Chazz Palminteri) and Keyes (Eugene Levy), who reveal that Lance has been taken before his time and that, even though his body had been destroyed by the semi truck, they can help Lance return to Earth.