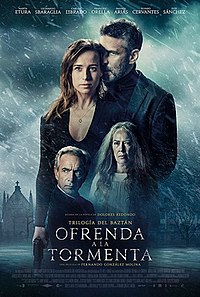 Offering to the Storm is a 2020 Spanish-German film directed by Fernando González Molina, written by Luiso Berdejo and Dolores Redondo and starring Marta Etura, Leonardo Sbaraglia and Paco Tous. It is the third and final installment in the Baztán Trilogy, following The Invisible Guardian and The Legacy of the Bones.

Inspector Amaia Salazar confronts the origins of her nightmares as she unfolds the darkest secrets of the Baztan valley.