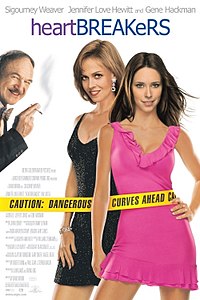 Heartbreakers is a 2001 American romantic comedy crime film directed by David Mirkin and written by Robert Dunn, Paul Guay, and Stephen Mazur. It stars Sigourney Weaver, Jennifer Love Hewitt, Ray Liotta, Jason Lee, and Gene Hackman. The plot revolves around an elaborate con set up by a mother-daughter team to swindle wealthy men out of their money, and what happens during their "last" con together. The film marks the last onscreen film appearance of Anne Bancroft before her death in June 2005.

Max and Page Conners (Sigourney Weaver and Jennifer Love Hewitt) are a mother-daughter con artist team. When the film opens, the Conners are finishing a con on Dean Cumanno (Ray Liotta), an auto-body shop owner and small-time crook. The con, which the Conners have played many times before on other men, involves Max marrying Dean, passing out on their wedding night to avoid consummating the marriage, and then Page (posing as Dean's secretary) luring Dean into a compromising position to justify Max's immediate divorce and hefty settlement. The con is a success.